I am developing a habit of justifying buying from the one euro rail on the basis that they are all moments away from landfill…… and am equally surprised at the amount of ‘good’ stuff that ends up there.  The downside is, I have to sew a bit faster so I am not hoarding. I did a photo of me wearing the original, but can’t seem to find it, which is probably just as well as they looked rather awful – more big knickers than culottes! 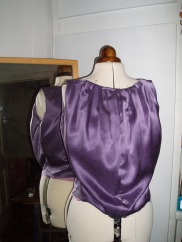 I got these silk culottes last month.  The silk is a lovely shade of lilac, and they were a home-made pair of culottes from probably 1982.  The maker went to great trouble to sew tiny machine stitches (I have given up on sewing tiny stitches for silk – I truly don’t see the point, as ultimately they are a pain to undo).  I took it apart with some difficulty, rescued zip and reused lining, cleaned and starched the fabric and set to making a blouse.

I had decided on a boat-neck tucked blouse and made up a pattern and made up a toile, and then made up the blouse.  I have not done a lot of this style of tuck/drapes and am happy enough with the way this came out, but would like to try some more to experiment a bit more with these styles. 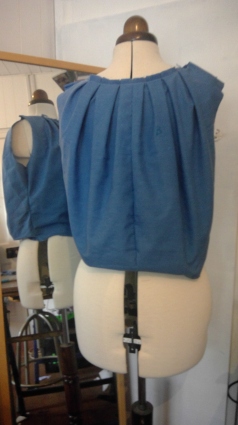 The cut was straightforward (centre seams on straight grain – I could have tried putting the front off grain but thought to play it safe for first time).  I sewed seams, and tucked the front and back, then attached the lining to neck and arm openings, before sewing shoulder seams and then hemming.  As with all good plans, I decided to change mid-course, and changed the direction of the tucks by the time I used the silk so as the centre seams would be more hidden, so I don’t think they sit as well as they should, but I had gotten rather tired of fixing them so I just finished them off! 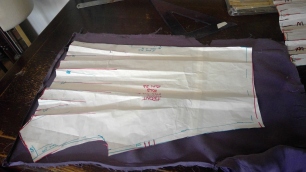 I had a bit of a do to attend last weekend, and I thought the top would look so amazing with a pair of black dress trousers. Ha-how wrong was I – either I have gotten bigger or the trousers smaller, and in truth its the former, so I decided 2 things:- one, never eat sweets again (…wild gamble…) , and two, to make a pair of new trews.

I bought some stretch denim on sale 8euro a metre, and ran up a pair of cigarette pants from last years pattern.  I was surprised what a quick sew it was, they were done in an hour or two, and I even did pockets!  And bonus, they work with the summer halter make from a few weeks ago! 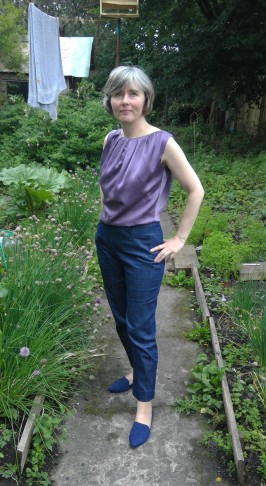 11 thoughts on “culottes to blouse – one euro buy”