When we moved here 4 years ago – I was in such a hurry to set up my work room that I hurriedly put up temporary shelves.  The walls are painted beauty board on minimal studs and the shelves were pretty dismal and it was in the corner of the room that was to become a bit of a glory-hole full of stuff propping more stuff up and hiding other stuff.  Inspired by a post in Sewing at Damgate, I moved my folded drawing desk to another room, gave James my Bobby trolley (5euro buy in charity shop) and he was so happy to get the trolley (had been vying for it for a while – and I don’t really use it) and also happy to help with a shelving solution for the workroom, that we got these sorted in a day! We used a simple slot in system and some pine boards and all of a sudden – complete organisation!  All of my sewing books are now finally together and while I hadn’t intended on any floor storage – I simply have too much craft stuff.  The floor boxes contain yarn, the next two shelves are sewing machines (the two white baskets are current projects to try and limit myself).  The shelf above is sewing supplies (the ikea drawers are full of spare re-used zips and other haberdashery) and books, next shelf is a mix of favourite patterns and other supplies and there is a top top shelf are boxes of less used supplies (christmas decorations, old belts, dyes) file folders and some empty spare shoe boxes (always handy). 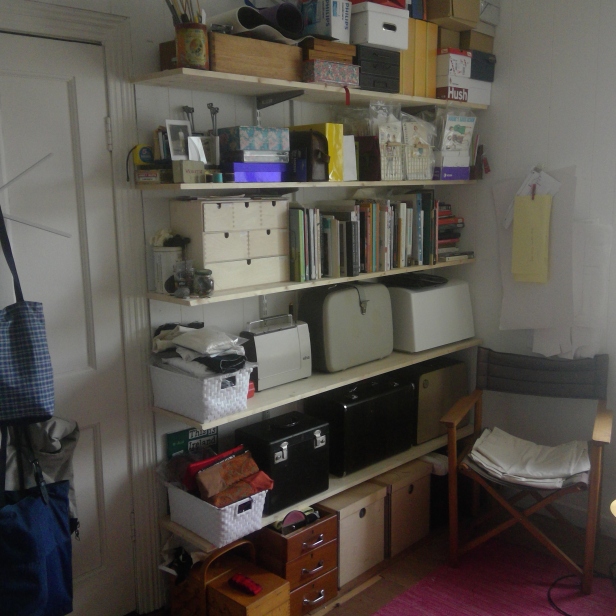 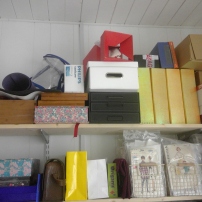 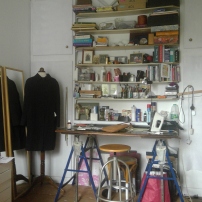 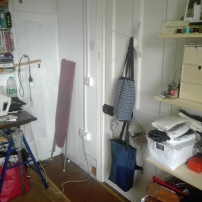 It also gave me a chance to organise my projects a bit better and try and take a critical look.  I rarely get anything in the charity shops now as I have more than enough to work on here.  One thing I did come across was this bag.  It has been hanging on the door for a whole year.  When I saw it in the charity shop last year, my thought was to clean it, take it apart, reline it and re-sew it…….honestly, I sometimes think the woman in my head sews a hell-of-a-lot faster than me.  So I got real – and looked up best ways of cleaning leather, and decided to take my chances on hand-washing and soaking with wool shampoo!  I only soaked it the first time for about 20 minutes rinsed, and let it dry and saw most of the stains came off so I soaked it a second time and scrubbed it with a soft nail brush and then soaked for about 20 minutes again, rinsed….. and then when it dried put some leather conditioner on it!

I have since put some dubbins on it and its now the same colour/tone as the rest….. the lining is still turquoise but cleaner – Job done!

We also did a fashion revolution mend day – it was a lovely day and I always meant to do something to mark the day as very little ‘fashion revolution’ events happen in Ireland and I thing only a few in Dublin and Cork this year.  Myself and Maureen and Helen (SewlastSeason) did a mend event in a community room/hub and met some lovely people who dropped by  and of course I have only a few blurred photos!

Its made in 1953 according to the serial number and for a 3/4 machine, its plenty weighty – lord only knows what weight a 66 or 201 would be.   I really like the mock alligator case – seriously these old sewing machine cases are like air-hostess luggage – so cute!

The first job the machine had was to remake a mock-suede bag.  I made this last year, but the singer excelle didn’t really ‘get along’ with the mock suede and the final finish was a bit rough, and either way I didn’t even use the bag as the pink didn’t really tie in with anything.  The other side of the fabric was plum so I just took it apart and turned it all around.  The second time I did not do as much top stitch, but what the machine had to sew, it did very well.

I also ran up some more purses and bags in an effort to use up scraps, and old belts and zips.  These purses are from Noodlehead.

The back pack is still a work in progress – I had a raincoat last year I was remaking and it was quickly going south as I didn’t have enough fabric, but I did manage to use it up in this back pack along with some old belt pieces – I will probably make a fabric strap or use old belts as the shoulder straps.  I think its slightly too big and also could so with some interfacing so I will be tweaking it over the next few weeks. 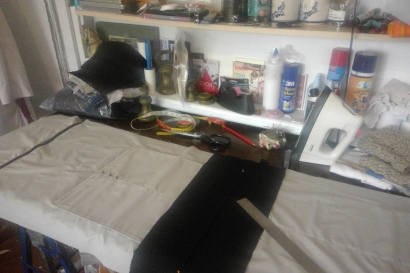 I also made a bag from some denim scrap and used a belt cut in 2 to make the handle.  the machine even sewed through this thick belt.  I was turning the wheel by hand for going though the belt, and even then I was beginning to feel like  a person that was deliberately cruel to sewing machines… 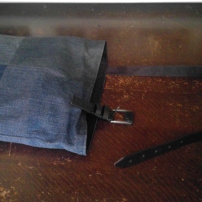 I then got a bit carried away and started on this butterick blouse and used some of the white fabric.  I was a bit quick and overconfident and the top-stitching is rather nasty so I have put it to one side and will redo it next week- reverse engineering my bad sewing habits will take more than the singer 99 I think. 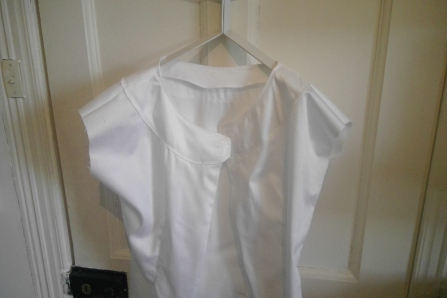 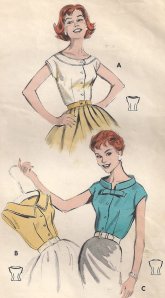 I have had these patterns for a while, and a wedding invite last January was a bit of an excuse to make them.  It was for an April wedding, (last weekend) in the very west of Ireland (connemara).   Both patterns are very simple, and were relatively quick makes (my favourite type).

I am especially pleased with the dress as I think the shoulders being slightly extended make it a very flattering cut for the pear shaped, and although I graded it out for my hips, I ended up having to take it in, and for all my ‘A-line empire line shift dress patterns’ this one is the best!   I wanted to run up a ‘wearable’ muslin – and as luck would have it, I found a strange (I think 70s synthetic curtain fabric?) piece in the fabric cupboard in the community sew room – It had been there a while, and has a not-great feel to it, but has the look of thick linen, and there was just enough to get the dress out of it.  There was not enough for the collar so I used some satin, and I didn’t fully ‘get’ the steaming of the collar first time, so I just bias bound it and simplified it.

Finding the fabric for both the coat and dress was a bit of a chore as the local fabric shop has only a small selection, and my favourite Dublin shop (Murphy Sheehys) now only does interior fabric, so I went online and got this from Clothspot in the UK.  I was trying to keep within a budget (40stg was the total in the end), and chose a grossgrain (not my favourite fabric but knew the weight would work fine) in a red and a cotton in ‘pebble’ for the coat.  The red dress was quick to run up and the collar much easier once kept steam ironing – I never did this type of collar before so was pleased with the finish. Basically its a straight strip of bias, folded and then steamed into a curve shape to mimic the interfacing, and then trimmed if longer than the interfacing.  I omitted the pockets flaps/mock pockets as I really could not see the point and they seemed unnecessary.

I had been hoping to make a summer coat for a while as they really are useful, but finding the right weight of fabric was difficult.  This fabric was slightly light for a coat, and creased easily enough, so I ended up interlining it at the last minute.  I was unable to get a cotton voile so I just used vilene – I did not interline the sleeves as they are on the bias, and therefore should not ‘hold onto’ an elbow crease (I think this should be the case but will see how it wears in time).  I lined the main part of the coat in some left over craft fabric and used regular lining for the sleeves (and not enough craft fabric left)

The collar of the coat is bias cut, and I had to do a pad stitch – which I never did before and wasn’t sure so out came Allyne Bane sewing book – creative clothing construction  (one of my go-to books) and I am really pleased with the roll and sit of the collar, it sits away from the neck.  Other than that, the only other issue was BUTTONS (I spent ages and ages and ages on them) – I could not figure one at all, but went with covered ones and they seem fine.  I did keyhole buttonholes on the machine, as I had not chosen my buttons until after the coat was fully made.    The side seams are slightly to the front on this which makes for comfortable in-seam side pockets, and the ribbon close just threads through under the arms.  I think it looks a bit fussy closed, but I do like the way the ribbons drape at the side when its worn open.  I stiched red gross-grain over wider plum gross-grain to make the ribbon-tie, and I have a blue brown one which I will use this summer to wear with denims!

I made the bag as well, but it was rather rushed as I did it the morning of the wedding!  I used a noodlehead pencil case pattern, and then recycled a lanyard clasp.

Overall, it all worked so well.  The day itself was incredibly sunny, but rather cool, so the coat worked out very well as most of the afternoon was spent on a windy terrace, and I got to wear my favourite silver shoes – so all good.