May 24, 2015March 27, 20162 Comments
Kathy’s swatches are never far from my mind…………well they are in plain sight all the time in the workroom, and I wanted to try a skirt with the embroidered linen pieces ( as in February’s skort, which did not turn out as well as I had hoped due to the differing fabric weights and is most probably heading to become a cushion if I ever get started on the domestic sewing.) The embroidered swatch has a lot of weight and stiffness in it. 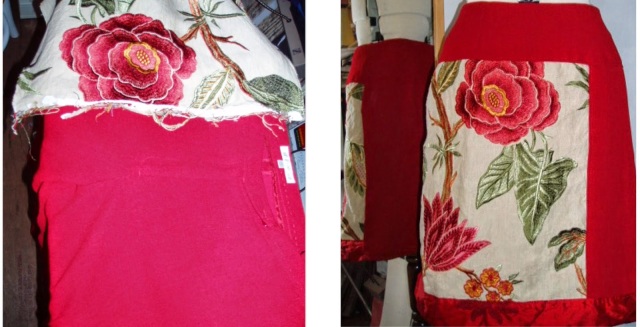 The polyester crepe trousers are not really santa trousers, but as I got them in the charity shop on a euro rail a week before Christmas, all I could think when I saw them was Santa pants.  The fit of them and cut is lovely, but I think the colour as trousers could be a challenge for some, me included.  The weight of the fabric is good and seems to fall well so I figured it should work with the linen.  The trousers had a strong crease, and I ironed/pressed it flat using a 50:50 vinegar water spitz.

The ever versatile vogue pattern 7776 was brought out again – the back panels were cut from the back of trousers (pattern placed ‘up side down’ so side flare of skirt was going towards the crotch.  I had to make an educated guess on the grain as the crepe was not going to rip correctly, so I chalked a line and laid the centre back line on this.

I sewed the front panels together before cutting the front as I wanted the front darts to be in the crepe, not the linen piece.  The front darts panel was cut from trouser end piece, and cut on the ‘cross grain’. I thought the crepe and linen mix was a bit flat, so I had a scrap of embroidered raw silk I put at the end.  I had toyed with including it on the back skirt but didn’t,  I pinned some across, and it seemed to be the same difference whether I did or not, so I used it to face the hem on the back of the skirt instead.  I put the skirt together to make sure it hung correctly, and then I top stitched, added zip, hemmed, and then made the facing and lining attached.    The lining is from another skirt.  Whenever I take pieces apart, the linings are put into a bag and I can take them as I need them, and the left over reds….. they will make a handy addition to the planned patchwork!

Overall, the skirt has turned out perfect, the back hem is basted and I will let it hang for a few days.  The weather here is still very cold so it will not get out for a few weeks yet!

May 19, 2015March 27, 20162 Comments
at the beginning of the year, I went through all the fabrics,/stash, and acquired charity shop buys and I made a plan to try and get through them.  Stash is about 12 x  half, 1 and 2 metre lots with 1 x 3 metre piece.  I divided everything by colour and then drew up some’ little ladies’ and had a plan for each month pretty much until August, and beyond.

For the most part this has been helpful to keep me focused and I can still update each month if any better options come to mind.  For all the remakes I have been doing – 50% have been trouble free and straightforward, and the other 50% have had to have a re-think, where there was insufficient fabric for the pattern (happens the most), or the design didn’t look right for the fabric.   Of these, most will go according to the new plan – however some do not. and these few are the ones I spend an obscene amount of time trying to make right before they work or I admit defeat…

May is not going to plan, at all, and I am having a week of it at the moment.  Two patterns I tried out on a whim are going a breeze, and one pair of trousers are going decidedly south (so they are being put away for the next while as they are breaking my heart) – and yet the piece I was supposed to be doing was still on the mannequin last Thursday waiting…..

its a pink cashmere sweater that came to a standstill – which is why this post is being posted a few days late…………When I got this sweater, I saw cashmere and the quality felt okay, and the size a little big, it was stained and had a hole in the underarm seam, and I bought it for 4euro.  When I got home, it went straight to the basin.   I am not too squeamish but I was surprised by how grubby this jersey was.   I did Home Ecc/Domestic Science in school, and amongst other things (like cooking sheeps heart…..), in one class we were taught how to wash a wool sweater.  At the time, I thought the nuns were leading me to a life of indenture and servitude and was not very impressed, whereas now I realised the value of these lessons (although I will pass on the sheeps heart!).  After laundering the sweater (and the dash of vinegar in rinse) it came up a treat and the cashmere got back its buttery softness – ah bliss!

I cut it to make a cardigan, trimming very little from the neck, cutting up a centre front, taking about 4 inches from sleeves and hem.  I hand hemmed using an ‘internal’  hand sewn zig zag stitch to keep it flat.  the thickness of the cashmere concealed the stitch (which was just as well as the thread is not an exact match.

My original idea was to crochet and sew on an elaborate trim in orange like a matador jacket, for the neck, front and hem edges and the cuffs – a bit of a grandiose idea, and I even dyed some left over mixed-silk yarn (daft I know) from the poncho last year.  I crocheted a swatch in red and a swatch in orange as I was unsure of the orange, and in the end I didn’t think either would work as  ‘the elaborate border’ so went the more conservative route of a simple trim.

The other piece that fell by the wayside this month is my planned  galatzine coat.  I was going to use some dress linen but think the weight is too light.  I did a toile (the toile was cut from the lining pattern as it was intended on being the lining) from a sheet and put it in the orange dye (its pretty awful and came out a very lurid shade.).  The toile has a lovely fit, but as the entire coat is cut on the bias I will think about it some more, If I interline it, I could lose the quality of the linen, and I wanted a lighter weight summer coat.  I did put a post on we sew retro asking if anyone had made it (no one had) and there was the suggestion of just going for a heavier weight which I am now reluctantly agreeing with….I am thinking of trying a simpler coat with the linen….. 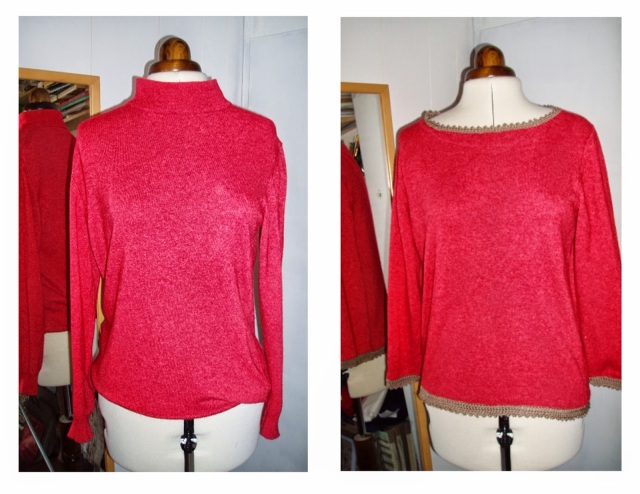 I got this jumper in a charity shop last year.  I can never resist a fine knit wool, this has some silk and rayon in the mix so its light and warm.  Its also got the style neckline I find odd, its neither a polo, or round neck, but I figured I would ‘road test’ it over the winter and decide its fate.  As its so light, I thought it would make a great ‘transition’ wear sweater (or as I am so cold blooded most probably a summer sweater).  I didn’t over-think it too much, and thought a simple border would work.  I had some double knits in stash, and would have preferred a 4 ply or fingering, but the double knit wasn’t as heavy as I thought it would be (and I also need to shrink the basket of half balls of yarn).   I had this ‘nico’ cotton a few shades – dark red, hot pink, cream, and taupe.  Originally I was going to use the dark red and then do the red with taupe, and then figured the taupe on its own could look well.  It co-ordinates perfectly.

I trimmed the sweater, and cut the sleeves a bit shorter, and cut a neckline.  I was a bit nervous cutting the neckline as I didn’t want to trim too much.  I tacked a hem on all edges and did a blanket stitch edging with matching linen thread (I would have preferred buttonhole thread but the linen thread matched perfectly).  The first line of single crochet was stitched to this.  I did some ‘single crochet together’ on the neckline rows to tightened the neckline a bit and finished the border with a row of picot.  I don’t know if this is too fiddly, but without it seems a bit too plain, and it can be easily undone.  It was relatively quickly done, over two evenings by the tv catching up on recordings (so didn’t feel too much of a slacker).   Really happy with sweater.  Always a good sign when I wear it straight away…………….