I have a cardigan for a long time, well since we moved to this house 4 years ago and I picked it up at a jumble sale a month or so after moving and finding out just how cold our new house could be.  Its one of those cardigans you can put on over everything and be warmer, or wear as a temporary jacket…..its not that I like it loads, its just so useful.  I also had not noticed it had a hole in one elbow  and it way too late  by the time I went to fix it, and I pretty much made a mess of it, so the next plan was elbow patches.  I couldn’t figure a patch I liked (yes I did have that dilemma!)  but when I saw some crochet ones on pinterest, I liked the overall quirks, so made some.  I would have liked them with more pinks and finer yarn and but went with the yarn ends I had.  There is something so appealing to me these days about the obvious handmade…. to the point I value it so much more (ironic considering my chunky stitches).  Some months ago, a friend commented on my jeans – ie why were there big cross stitches on the arse of my jeans….. I had to explain that they were sashiko mending, the new-old way to darn (I was trying to be succinct)…..and went on to the point that I was nearly selling the idea that my badly done example was the way to do it (oops)…… I have a strange vanity about hand-stitching, no matter how badly its done, I see it like drawing….its all my work! 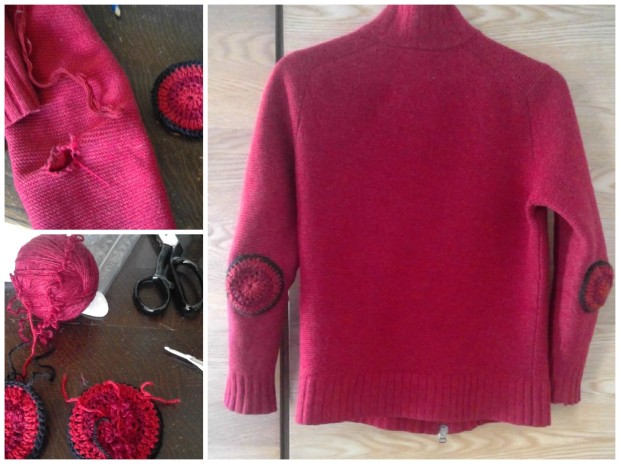 Other than that – I seem to have made it my mission to catch all the colds and top it off with a flu (at which point I finally went to the doctor who tells me – oh flu….cant give you anything for that) so I was lying low beyond going to work etc.  I had planned to embroider cushions as presents (didn’t but did made some more tea-towels….its a polish saying and I think apt for when things are out of your control) as well as a cute collar for a friend (will be making more of these), as well as a dress (chose awful fabric for this, navy wool gaberdine – what was I thinking so now it looks like a verger, and it looks worse on, but I have planned to remake something from it in time).  My sewing plans for January consist of finishing the projects started in November, as well as a make a few patterns I really really want to try and have been on a wish list for a while. 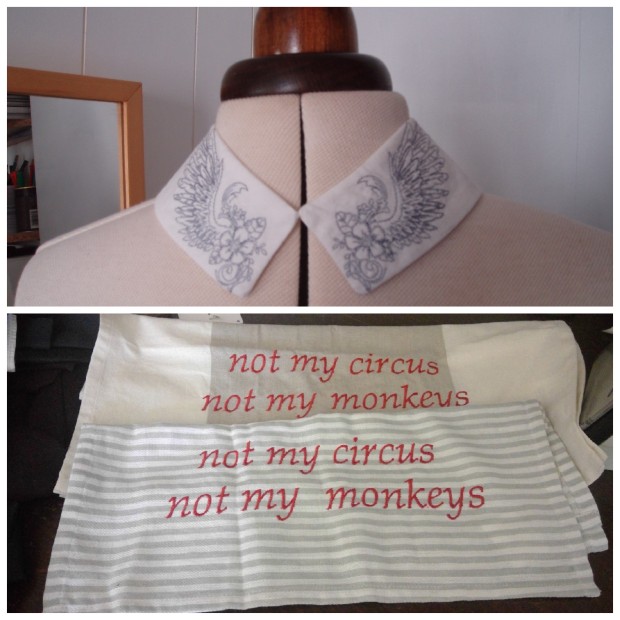 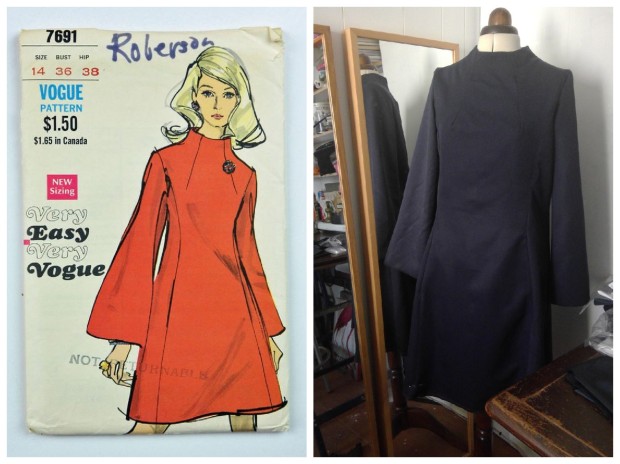 planned makes for 2017…………the last two patterns are for my sister, the 4th pattern I am unsure of still….the toile looks too much like a sack…..

I also got a whim for the sales and did some browsing.  I don’t have a strict no-buy-new policy, it just ends up that I have not bought new for the last few years as inevitably I am put off buying anything in the shops as its either badly made, awful fabric, or doesn’t fit, …and I also was trying on styles I love, but styles that don’t suit me…..  Ultimately I always feel the better after this experience, as I count the money as saved by not buying and congratulating myself on making clothes I like and fit me better than the store-bought.  Although subconsciously I must have had the intent to buy something, as I did get these trousers in the charity shop, and they are divine wool, fitted well, and are lined beautifully, and a swanky ‘label’  …..they only needed to be taken up, and a small ‘sway back’ adjustment, and I steamed them.   I always end up somehow wondering about the former owner of these clothes (is that creepy?)  And as they had such little (maybe none) wear, were they a sale buy?  did the long legs of these fit this person? wouldn’t it be so convenient if my legs were 2 inches longer and I didn’t have to take them up etc….. and I couldn’t bring myself to cut them, so I hemmed by turning up again as some part of me thinks that in some years when I donate back to the shop, a long legged person will get them and need to take them down…. 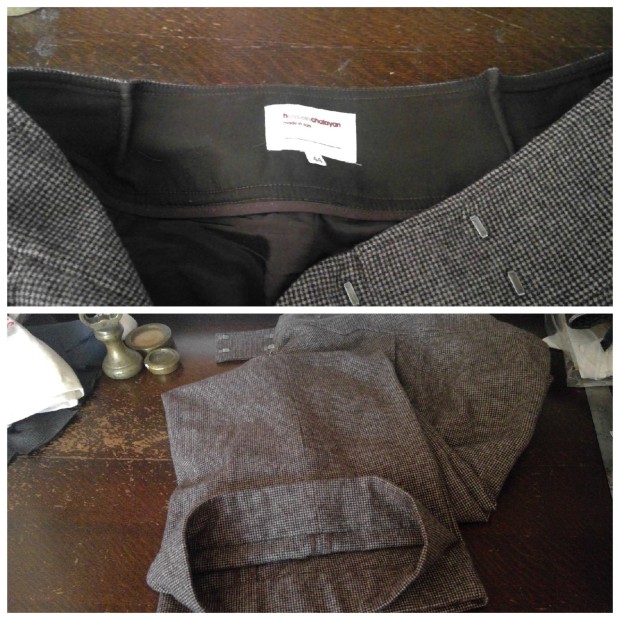 I did manage to do my christmas card as usual – although one friend was quick witted enough to compare to the Aldi 4 bird roast!  And obviously I meant to post this one sooner on the blog………..but I was fixing a cardigan!  I am off to Dublin for my ‘second’ christmas with my fab sis,  (working in retail seems to overtake the actual day as it just becomes one day off – so my focus is always on the days after which I enjoy so much more), and I am thinking I may call to the lovely Murphy Sheehy Fabrics as the vogue coat needs 3 metres of fabric and has a bias sleeve…. 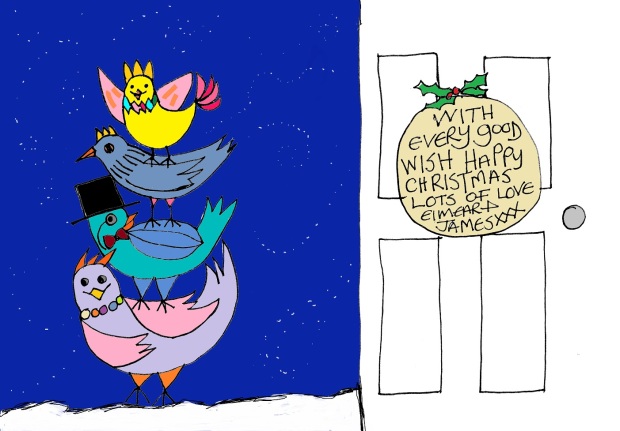 I have a sweater that I wish to embroider, and this is not it!  This DMC motif came up on my facebook feed and I liked it for a sweater, but didn’t want to put it on the other project so thought if I saw a cotton knit in the ‘charity’, I would give it a try as I do little hand embroidery and had never done it on a knit……. 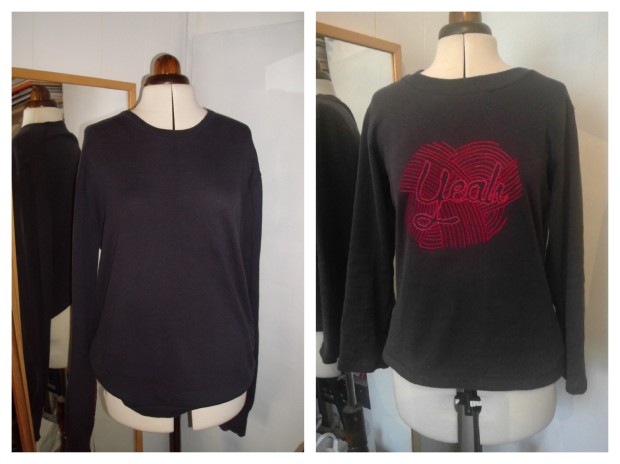 I used the Seamwork Astoria pattern (again) and modified it by lengthening sleeves and body.  This time instead of the crochet edging I hit on the idea of taking the ribbed cuffs and using them as the neckline – and yipee – it worked!  I also whipped it up in no time as I used the sewing room overlocker (I recently started volunteering in a community sewing room – its still in a development phase as only open a few hours here and there but will be interesting to see how it works out).  I still don’t believe I need an overlocker but am definitely finding them super handy for knits.

Figuring on transferring the design was a bit of a conundrum, and putting it in a hoop was a disaster.  I enlarged and traced the design on tissue and wanted to see if I could sew through it (of course I could but it kept ripping).  So in the end, I backed the jersey with knit vilene, and used the temporary fabric glue to apply the tissue design and it worked a treat.  (I got this fabric glue to help me machine embroider velvet so its great to find another use for it).  I put a board in the middle so I didn’t pick up fabric from the far side of the sweater.

I did a basic chain stitch, and did Yeah in a paler shade.  I deliberately did not buy new thread as I wanted to use up what I had, but I think I should have done Yeah in more of a contrasting colour.  Some of the red floss, was a 8 strand that I was given with random left over craft bits, and although I got to use it up (I did 2 strands) it was very knotty so glad to see the end of it! 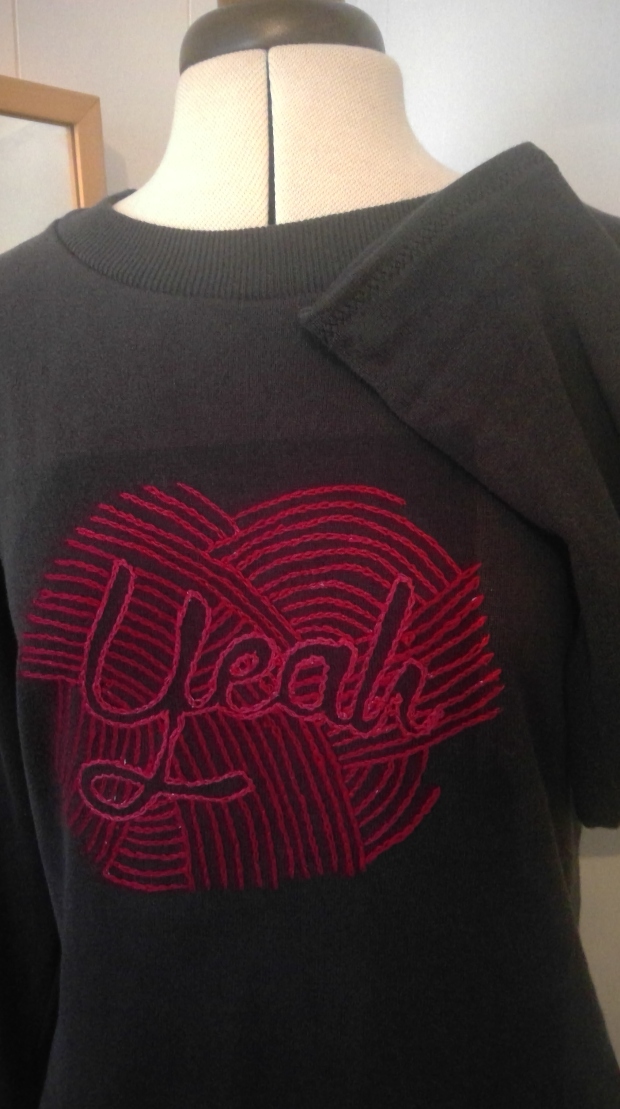 I forgot how pleasant hand stitching is.  I am hoping the next sweater works well, its a wool knit, and so far the stitches seem to be drowning in it!

Probably one of the more exciting things that happened this week was whenever I got to change flavours in cough sweets.  I have been rather bogged down by a sore throat/lost voice all week, so sounding like Kathleen Turner (how cool) but punctuated by hacking cough (how not cool) and feeling a bit peeved by it all and with only myself to blame (as I went out with a cold, came home with no voice).   I did manage to refocus the sewing, and finish this red coat . 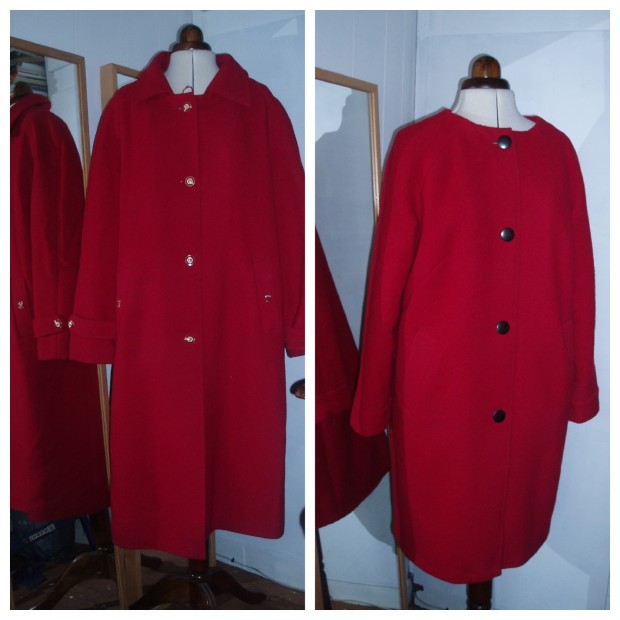 Its probably my longest sewing project as it was done over the course of 6 or 7 weeks, and yet it only really took 2 or 3 days.  The coat is a divine cherry red wool, in an 80s cut, and the buttons were of the same ilk (and just look plain old tacky).  So I took it apart, brushed it and steamed it and rested it for a few days before the cut.  The lining was in good condition so I took a chance and put it aside to reuse.  I used the same self drafted pattern I used on last years coat, and decided to cut front from front etc, and reuse both the pockets and the buttonholes (as there was not enough fabric to redo the buttonholes) and in all this seemed all like a good idea and both the coat and lining were sewn up in a day, over a month ago…… and left there.  After making it up, I decided I was not sure about the darts (I have since relented and like them but would omit/change them if I was using this cocoon-style coat pattern again), and then I dithered on how best to finish (there is no best way, the only way is to get on with it). 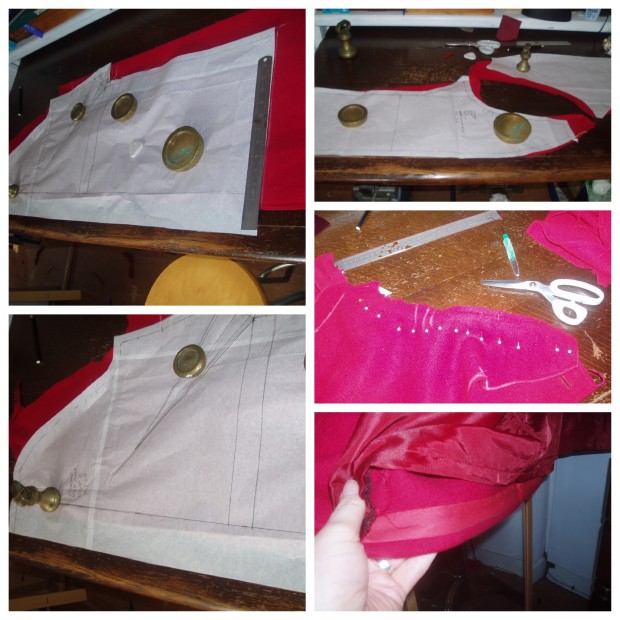 In truth, the only delay was finding better buttons, and I ended up using ones that came from the button box that are a dark metal.  They are the right size and seem to work well. So then it was trying to tweak the already attached front facing into joining the rest.  I cut the back facing from the left over scrap and also made the sleeves longer but adding a deep cuff, I thought I wanted the coat shorter, but preferred it a bit longer when I had it near done, so I added bias binding to the hem to maximise the length.  I left the wool label in place…..but don’t think I will ever ever reuse those gold buttons….. 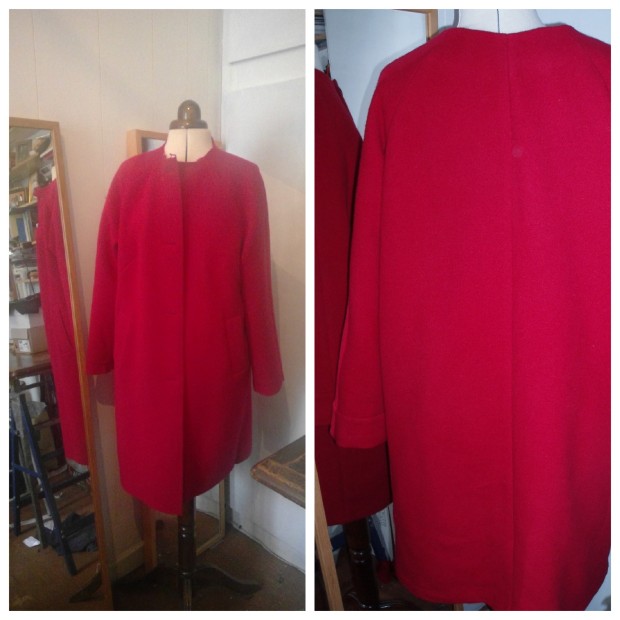 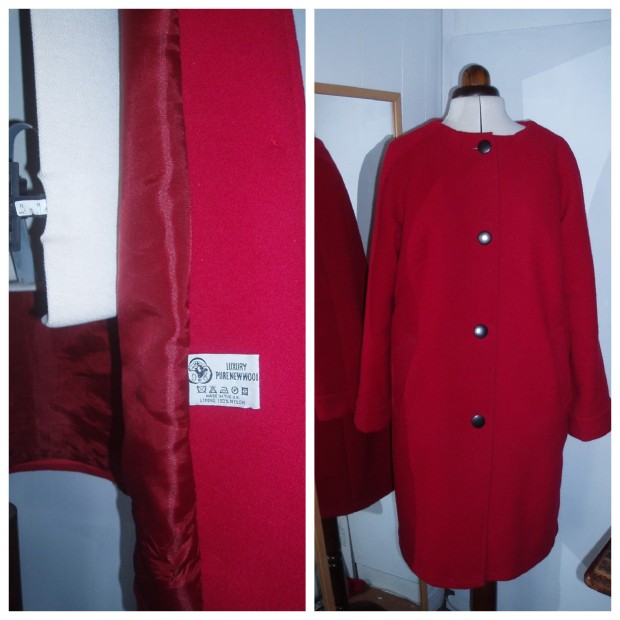 Finishing took a day, and I was rather pleased. So I steamed it and clamped it and broke the Ann Ladbury rule (of resting coats overnight on hanger or manequin after making and pressing) and wore it straight away.