When I saw this red dress, I couldn’t believe how fine the wool was, and I deliberated for a long time as there were so many bits.  I normally avoid pieces with too many seams as it’s a compromise from the get go.  So I took out my little muji measuring tape and still though the strips of red – measuring about 25cm wide each was too small, and although the sleeves contained more fabric, I still went ahead an bought it………. it was the lovely wool.  I placed a good few patterns over it – but not enough fabric, so I decided to make a simple shift and work pretty much with what was there.  I had originally thought to work in some strips of orange fabric or pink worsted wool scraps I had, but as there was a bit of topstitch detail already, I figured I would leave it at that.

The before picture is a bit dee-sasterous looking, very difficult to see the red clearly, so I have a drawing below with the before after as this shade of red and my basic camera seem to just blur it all. 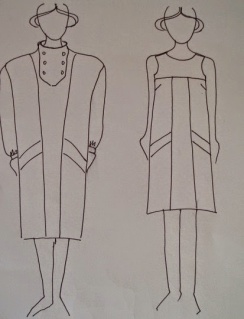 I took the front apart so I could turn the middle panel the other way to get the wider cut (bringing the 80’s shoulder fabric content down to the hem), and still keep the pockets.  I should have realised that the wool was stretched when I was cutting the dress out  and I should have steam shrunk it then (see first photo below) but I left the side panels as they were.  By the time I was sewing the side panels on I was questioning my reason.  The pockets would not line up – I sewed and resewed far too many times before I got the measuring tape out.  I really could not understand how I lined them up and they would then ‘look’ so wrong.  It turns out the pockets were never even on the original dress – and my best bet was to have the top of the lhs one a bit higher making the bottom of the pocket a bit lower so its balanced – hard to believe I never saw it to begin with, I had to take a photo to show. 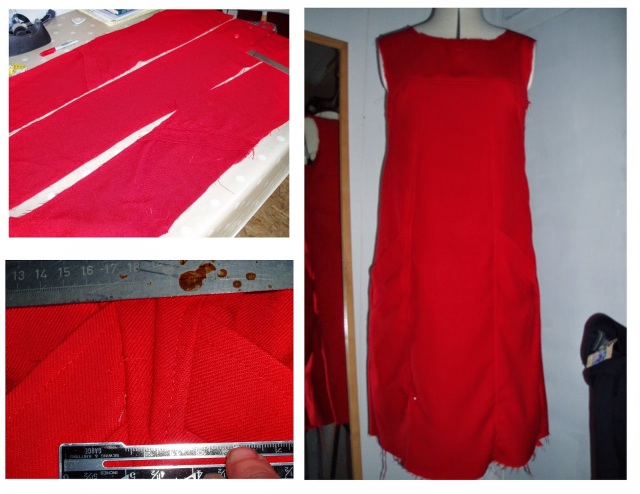 By this stage I was beginning to swear a lot, and when the whole piece was together, I was in continuous swear mode….. the stretch in the wool was everywhere and draping where it shouldn’t and the whole re-made well-made seemed a bit silly. I had hoped for this to be my Christmas day dress – ho ho ho – like that was going to happen – however, I really liked the overall shape and proportions.  I figured I would leave it till January to see if it could be rescued and this in itself would be better for my sanity. So last week I undid both seams to check grain, and the lhs was slightly off so I straightened that, and then, I decided to try and steam shrink with a hot iron and let the fabric rest and cool, and it seemed to do the trick (well improved it a lot)! its still a lil’ bit uneven – however, its also finished, will be worn and pattern most definitely used again!

The pattern magic books are pretty inspiring.  I know when I first came across them I was got such a  kick out of some of the quirky ideas and when I would show to some friends* the reaction was often simply – “but seriously, would you really wear that”  (probably about crushed can top!)  just goes to show, unbridled enthusiam is not always infectious.

This one was made from one long one euro jersey dress and the pattern was quick to draft, but I should have made the neckline slightly smaller but only by 1 cm all around.  The tee shirt is very wearable and very comfortable.  It was quick to make up (not having to finish seam edges helps).  I like the way the tee is plain to front, and draped to rear.  The tee shirt took up most of the fabric of the dress, and I cut bias strips from left overs to finish sleeve edges and neck.

I have also made a second one from a jersey skirt.  I had to made this one a bit narrower at the base of tshirt as there was less fabric to play with, but it still worked fine.

*just to add, some of my lovely friends are not sewers so the reaction was probably to be expected!