So the month has come to an end, and as its march next, so making way for some green makes!

This week I finished a skirt and nearly finished the skort  I had to launder both skirt swatches before I used them and thankfully neither shrank, so it was off to a good start.

The skirt was made using the vogue pattern 7776, and a pair of black trousers, pretty straightforward as this pattern uses petersham instead of a waistband (big plus, easy and comfortable), and I reused the zipper from the trousers.  I joined black fabric to the swatch in straight edge strips and then cut out the skirt front.  Its a nice skirt and worn a bit (constantly) last week! 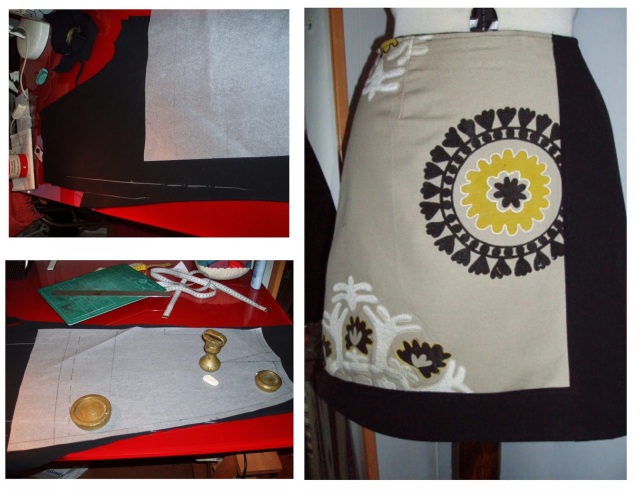 The skirt put me in a very optimistic mood and this as well as some fine spring weather, had me making the skort.  I was cycling a few days ago and the weather was so sunny (not warm just sunny) which put me to thinking of making the skort in the same pattern.  I used a linen/viscose skirt for skort back and shorts front, and had to make the short backs from another piece of linen from a pair of trousers (same shade and weight and as they would not be seen I felt ‘safe’ enough)t , and the swatch made up the front flap.

I am a bit / lot / seriously unsure on the skort.  The heavier weight of the swatch by comparison to the linen may or may not work, I put some interfacing on the pieces around to work better with the panel  The instructions were a bit fiddly and I am unsure if I did the hems the correct way. so I have basted hems for now.  Its not summer for a long time yet so plenty of time to figure final details.  The front of shorts, back of skirt were made from a skirt, and the back of shorts were made from a similar shade and weight of linen (linen trousers).

The closure will probably be a button at the waistband as I think putting buttons on the lighter fabric could pull on it.  I will wear it about the house when the weather warms up and figure it then.    I am still undecided on the front section, as I don’t know if it looks too much like patchwork? However, as its a summer skort and a lot less revealing than my tennis skort – so perhaps a lot more practical. 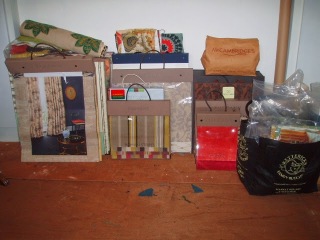 I have still plenty of swatch books! and and will probably be dipping in here and there for the next while – the black bag contains potential projects…………….. which means the mannequin will no longer be covered 24/7 in clothes and swatches trying to get colour matches

February 13, 2015March 27, 2016Leave a comment
These swatch books from Kathy are amazing, and coincidentally last week just as I posted the patou top, I got another text from Kathy with the offer of more books – and more fantastic books arrived that evening.  Big thank you to Kathy!

James has been looking at the covers and is taking them and the metal corners for book bindings (he makes his own sketch pads), so they are slowly being used up.  There are a lot that will be left for cushions and curtain trims, and later in the year.

This week I was playing at a few things themed red and came across the pattern for the yy bag.

The linen pieces in the swatch books had a great tight weave and sheen finish, so were perfect for this bag. The bag made up in no time at all.  I only changed the base as I had cut the brown linen piece in half as I had matched it with last weeks top at one point, but I made up the outside length for the yy bag easily and top stitched it and then lined it with an old pillowcase.  I used an iron-on woven interface on the lining only. 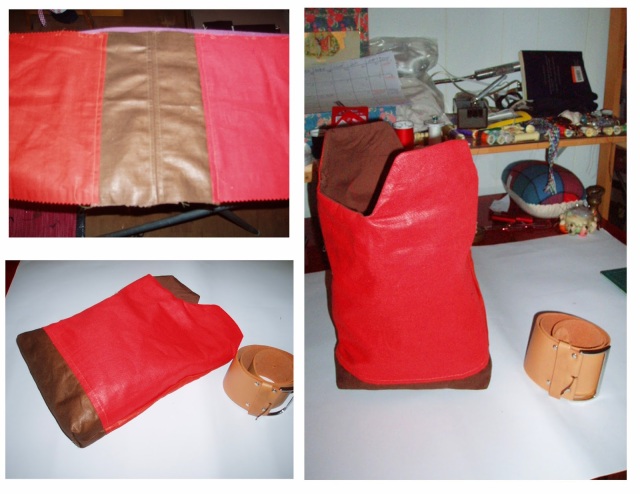 I had also a belt that I could cut the leather strip handle from, so it was all was going so well – until I went to look for eyelets.  There are so many advantages to living in a small town, finding large eyelets and small rivets for your new handbag is not one of them!  Luckily there is always etsy – so they are on the way and I will update the finished bag when they arrive…………… and hopefully the eyelet tool here will work!  The yy pattern is a dream to work up – and I am thinking of enlarging it for a shopper – once the eyelets arrive (its now the chinese new year so the last update via etsy seller is there will be small delay).  I am leaving cutting the handle until they arrive and will update the photo then (assuming my rivet and eyelet tools here work!)

Update – finally finished 22nd April – love the bag, eyelets were messy as I didn’t get tool but improvised with hammer, pliers and plastic lino tool handle! 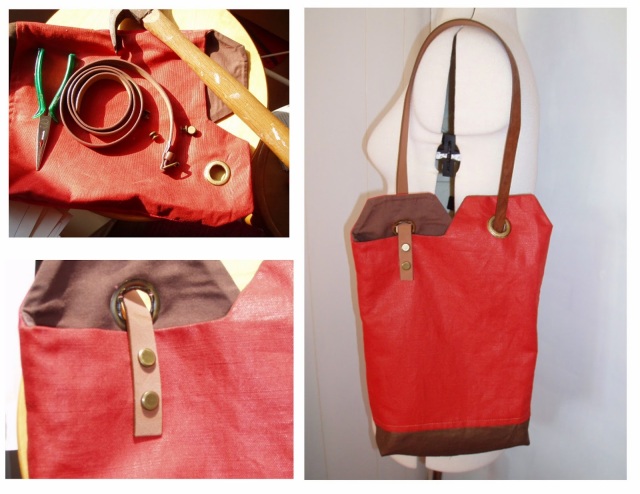 One book cover was made into a lil cat tent.  I saw this pic, and had to make it.  We have two cats and they are still adjusting to last years move to  town after the previous 4 years living in the woods (we lived beside at 100 acre wood previously) so they don’t spend as much time as they used to outside.  The tent was inspected but it is of little interest currently while there are better seats nearer the fire! 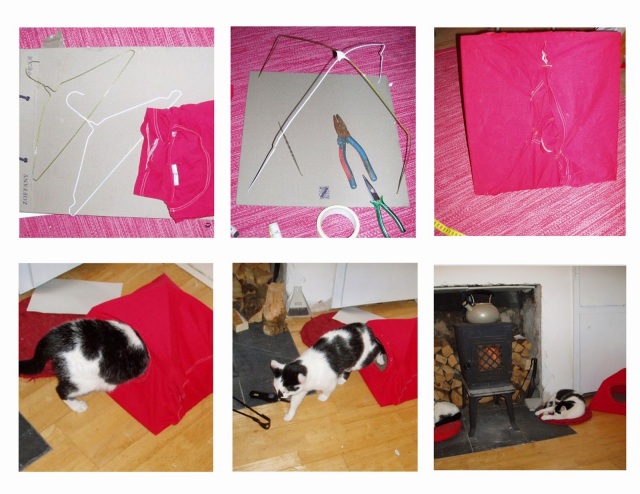 and as its valentines – the anthropologie blog had this instruction, so I made this from some of the wallpaper samples………………….

Just before Christmas, I got a text with an offer of some old fabric and wallpaper swatches  from an interior designer friend. Obviously said yes – and what amazing swatches books they were.  They are mainly Zophany – so seriously  swanky stuff! I opened up some books, divided the swatches into colour, and then kept re-arranging them….and seeing what end pieces I had which could be used up.

I am trying to finish writing up some patterns for upload before the end of the month, so this would be a perfect opportunity to get some small projects done and write up the last bits of pattern – and for the most part these swatches will be bags, cushions, slippers, but I am hoping to get some incorporated into clothes so I tried to make a small top this week.


First up – the patou top.  I had hoped to make the coat from this pattern , but that is not going to happen for the moment, so I did like the look of the top, and wanted to try it out.

I made up the front from a series of rectangles and used a grey band at the bottom from a 1euro charity dress which was a good neutral for backing.  The colours looked good together but the fabric weights differ enormously – so I lined the inside with fabric instead of facings.  It should be okay, but the grey fabric is a very thin cotton silk, so I am going to baste it at the hem,  and launder and then see if it needs a different treatment at the hem.  I have another swatch of this which I am still putting together with some odds and ends here so may try to make that that up yet for my unsuspecting sister………………